Bishops of the Diocese of Erie

The history of the Diocese of Erie begins in 1789 when the 13 counties of northwest Pennsylvania were considered to be part of the Diocese of Baltimore. This remained the case until 1808, when the entire state of Pennsylvania, along with Delaware and northern New Jersey, became a part of the newly formed Diocese of Philadelphia. Historians might argue that Bishop Francis Patrick Kenrick of Philadelphia was the first episcopal presence over our diocese.

The Diocese of Erie was created by papal decree in 1853, and on October 1, 2012, Bishop Lawrence Thomas Persico became the tenth man named as its shepherd. Who were the nine men on whose shoulders he now stands? The Most Rev. Charles Chaput, archbishop of Philadelphia, mentioned them as part of the communion of saints who would be praying for Bishop Persico during his episcopal ordination ceremony.

Father Justin Pino, archivist for the Diocese of Erie, has provided a wealth of personal stories to share about each bishop. These essays provide insight, not only into the life each man led and the work he did for the church in northwest Pennsylvania, but also into how God has provided for our diocese since its earliest days.

It Is Better to go to the Lions

Consecrated on 15 August 1843 at Saint Agatha’s Chapel of the Irish College in Rome, Italy; arrived in Erie as a bishop (formerly Bishop of Pittsburgh) in 1853; served as first bishop of Erie from July 29, 1853 until his transfer back to Pittsburgh on December 20, 1853. 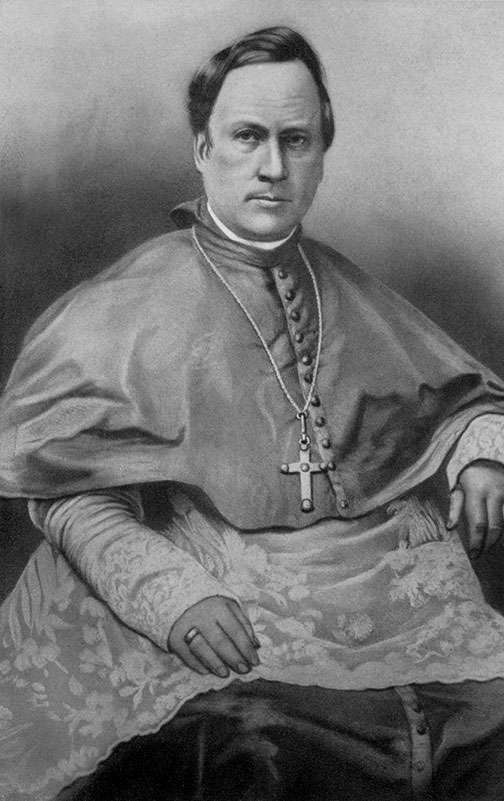 Bishop Michael O’Connor’s lifelong desire was to become a Jesuit, according to Father Pino. Th e Irish native wanted nothing more than to serve people as a priest and a teacher.“There are many bishops throughout history who were thrust into the episcopacy because of their great knowledge,” he observes. “Bishop O’Connor was smart and caught people’s attention when he was studying in Rome.”

Noting that dioceses were being created very rapidly in 19th century America, Father Pino says Rome looked to Europe for new bishops because there were no native clergy at the time.

“Essentially, the pope needed him,” he explains. So Bishop O’Connor became the bishop of Pittsburgh in 1843. Within a decade, he felt the Diocese of Pittsburgh, which covered the western half of Pennsylvania, was simply too large, so at the Plenary Council of Baltimore in 1852, the Diocese of Erie was created, encompassing the 13 counties of northwest Pennsylvania.

“We’re not sure if he wanted to come to Erie or if he was sent here, but Bishop O’Connor was named as our bishop while Bishop Joshua Young became the bishop of Pittsburgh. Bishop O’Connor arrived in the middle of winter and it’s fair to say it was not a happy experience,” says Father Pino. “You have to remember he was essentially a missionary bishop at that time, living in the wilderness, traveling by horse.”

Bishop O’Connor stayed for only a few months, and there is no record of him having performed any episcopal functions during that time. Somehow, he and Bishop Young were able to essentially trade assignments, and both the bishops and the people of both dioceses were apparently satisfied with the new arrangement.

Happily for Bishop O’Connor, in 1860 he received permission from Rome to retire, at which time he was finally able to become a Jesuit.

“He studied on a fast track and took all four vows at once when he was nearly 60 years old,” says Father Pino. “He taught at Georgetown and on the lecture circuit until his health declined.”

Bishop O’Connor died in 1872, and is buried in a traditional Jesuit grave with his community in Woodstock, Maryland. The cross on his simple gravestone is, however, three inches higher than that of his brothers, indicating that he served as a bishop of the church.