The Cathedral is the first and foremost church in a diocese. It is the visible symbol of unity between bishop, clergy, and laity. Not confined by boundaries, it is intended to be the mother church of all the faithful in the diocese. 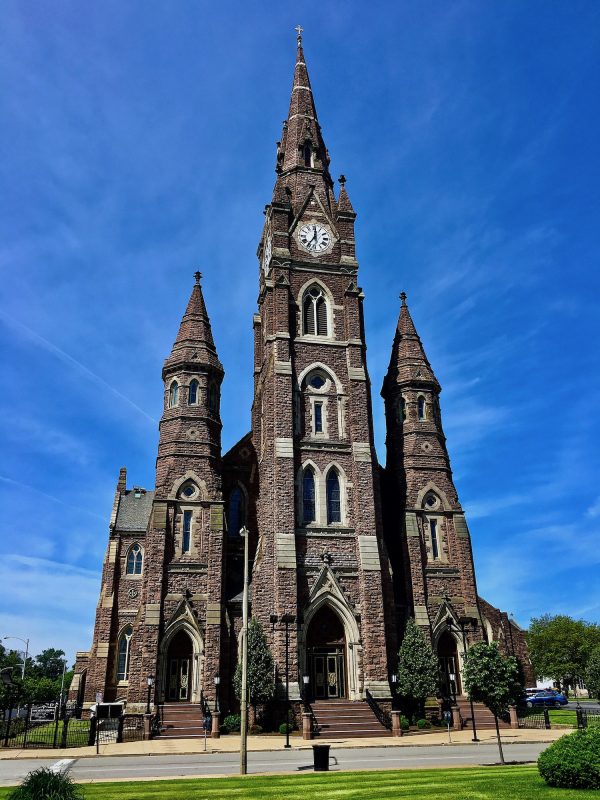 Saint Peter Cathedral stands majestically over downtown Erie at the corner of West 10th and Sassafras Streets. It is testament to the perseverance of the Catholic faith and serves as the spiritual home to the Catholics of Northwestern Pennsylvania

The greatest single monument to the memory of Bishop Tobias Mullen (1868-1899), the third Bishop of Erie, is the construction of St. Peter Cathedral in Erie. Before ground was broken in 1873, St. Patrick Pro-Cathedral was the residence and principal church of the Bishops of the Diocese. The old Pro-Cathedral was demolished in May 1906 and replaced by the present beautiful Romanesque styled church in the same year.

Bishop Mullen was in the Diocese less than two years when he envisioned building a cathedral that was really beyond everyone’s imagination! When he unveiled his plans in 1870, Catholics as well as the rest of the community were astonished! The principal ques­tion being asked was “why such a large building for the thousand or so adult Catholics who were living in Erie?” Likewise, most people realized that the funds were not available for such an undertaking. But, the visionary Bishop persisted and the project was soon dubbed “Mullen’s Folley.”

The construction of the new cathedral took more than twenty years. Bishop Mullen committed himself to a policy of allowing work to progress only when he had sufficient funds to pay for materials and labor. He himself often donned working clothes when nec­essary and pursued his fund raising efforts so strenuously that people would duck into alleys to avoid him!

His dream began with the purchase of a site 247 feet long and 165 feet wide at Tenth and Sassafras Streets for $13,583.29, including interest. Then, he engaged Patrick Charles Keely of Brooklyn, New York, the most prominent Catholic architect of his day, who designed 16 cathedrals and more than 600 churches in the United States and Canada in his lifetime. Bishop Mullen had only $9,000 on hand at the beginning of the project which was estimated to cost a quarter of a million dollars!

It is generally agreed that the basic style of the cathedral is Gothic. But, whether it is English, French or Victorian has always been a topic of discussion. It is probably safe to say it is a combination of all three. The central tower and the general design appears very much like the Medieval English Cathedral at Exeter. However, the rounded Mormon towers on the facade of the cathedral are French in appearance. Originally, the interior of the cathedral with its vaulted ceilings and walls of decorated plaster, the dark­ened woodwork of the walls and pews, the dark oranges, reds, and greens in the stained glass windows, and stations of the cross were the principal Victorian aspects of the cathedral which were popular in the latter part of the 19th century. In other words, both in construction and style it was not pure English Gothic like that of St. Paul Cathedral in London which took Christopher Wren a lifetime to complete.

The cathedral was to be built of red sandstone quarried in Orleans County, New York and adorned with cut stone trimmings from Mercer County, Pennsylvania. By May 20, 1874, Bishop Mullen was ready to reveal some of the dimensions of the new building. Keely’s fondness for stone spires can be noted in the beautiful facade of the basic Gothic structure. The center steeple is 265 feet high, including the copper, gold plat­ ed cross which is eleven feet high. The twin spires flanking the clock are 150 feet high. The building is 220 feet long. Its width at the transept is 112 feet, and the height from the floor to the ceiling is 75 feet.

By the time of the cornerstone laying on August 1, 1875, the basement walls were high enough in some places to support the floor. The occasion was marked by much ceremony and fanfare. Excursion trains brought hundreds of people from the surrounding towns. Thousands of Catholics marched in procession despite the rain.

Bishop Mullen used this occasion to address the issues of size and expense. He remarked that eventually the cathedral would not accommodate half of the Catholics in Erie! And, he reminded his audience that when Bishop Young arrived in 1853, there were some six to eight thousand Catholics but at the moment there were approximately forty thousand. He paralleled this obvious growth with the growth of Catholicism in the entire United States. In 1790, there were about 25,000 Catholics as compared to six to eight million Catholics eighty-five years later.

After the laying of the cornerstone, progress was painfully slow due largely to the difficulty of acquir­ing the proper materials. However, to add to the Bishop’s problems, the county commissioners attempt­ ed to tax the unfinished cathedral on the grounds that the building was not actually in use as a public place of worship! The decisions handed down by the state Supreme Court at Pittsburgh favored the posi­tion of the county commissioners. The cathedral was thereafter subject to taxation until May 1, 1881 when Bishop Mullen said the first Mass in a roofless church assisted by Father Thomas Casey and a few parishioners at a temporary altar!

After the roof was completed, the plastering was done in 1887 at a cost of $10,546. Bishop Mullen marked the completion of this work by again celebrating Mass in the cathedral. On a cold New Year’s Day in 1888, despite the fact there was no heat or windows, a large congregation filled the nave. Work, how­ever, proceeded apace, and by 1890 the windows were being donated. In the next year, the first main altar was in place along with the altar rail even though the side altars, pews, and other accoutrements were still missing.

Early in 1893, Bishop Mullen purchased the old Metcalf homestead on Sassafras Street immediately adjacent to the cathedral and moved into it from St. Patrick’s rectory where he had resided since his installation as Bishop of Erie. Later, that same year, to mark the occasion of his Silver Jubilee as a Bishop, he chose August 2 for the date of the dedication of the Cathedral.

The city of Erie joined in the two day celebration. Bunting was hung along the streets in preparation for the festivities. On Tuesday August 1, 1893, in the afternoon, Bishop Mullen along with dignitaries from Baltimore, Philadelphia, Buffalo, Cleveland, Pittsburgh, Scranton, and Harrisburg reviewed a pro­cession of 4,500 children waving American flags. An evening torchlight procession of 7,000 men marked the largest non-political event in the history of the city. Bishop Mullen and his guests received the pro­cession from a platform constructed in front of the cathedral residence on Sassafras Street.

On Wednesday, the second day of the great event, Bishop Mullen was assisted by Fathers Casey, Decker (St. John pastor, Erie), and Coonan (St. Bernard pastor, Bradford) in celebrating a Pontifical High Mass at which Cardinal Gibbons of Baltimore was the homilist. In the evening, a vesper service was held with Archbishop Ryan of Philadelphia preaching. Bishop Mullen took the occasion to announce the appointment of Father Casey as the first rector of the cathedral! He also recognized the tremendous con­tributions of the Casey family to the building of the Cathedral. It has been estimated their financial aid amounted to about one third of the total cost which was in the range of $300,000!

Before Bishop Mullen was stricken with a paralytic stroke on May 20,1897 while celebrating Mass in the Cathedral, the cornerstone for the Cathedral Grade School was laid. A contract had been set on September 24, 1895 for the construction of the school for $15,570. But, his poor health after the stroke made it necessary to install the Reverend John E. Fitzmaurice, the rector of the Philadelphia Seminary as the Coadjutor Bishop of Erie with the right of succession. His ordination as Bishop took place in St. Peter and Paul Cathedral in Philadelphia. His succession to the See of Erie was approved by Rome on September 21,1899. 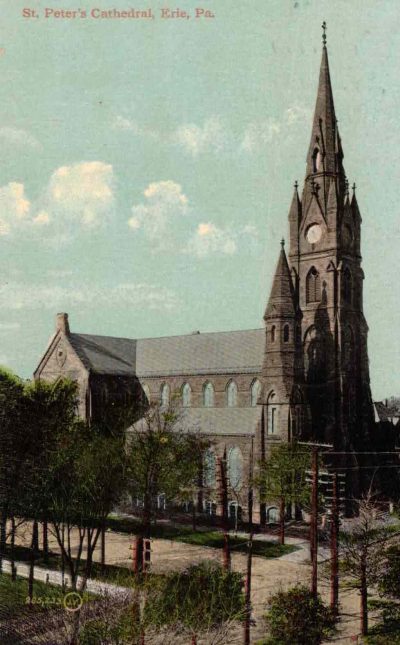 A 1912 postcard depicting the Cathedral before the installation of the clock.

Like Bishop Mullen, who passed to eternal life on April 22,1900, Bishop Fitzmaurice was an Irish immigrant. Born in Ireland in 1839, he had as a young man studied law, but immigrated to Philadelphia at the age of nineteen or twenty and decided to enter the seminary. Ordained on December 21, 1862, Father Fitzmaurice did parish work for twenty four years before he was named rector of St. Charles Borromeo Seminary in Philadelphia.

Bishop Fitzmaurice (1898-1920) took great pains to maintain and enhance the cathedral. After he built a marble crypt and burial vaults under the sanctuary where Bishops Young and Mullen were rein­terred, he turned his attention to the interior of the cathedral. Bronze bells were purchased (1903), the ceiling painted (1903), the sanctuary decorated by the Rambusch Company of New York (1908), marble altars installed (1911), statuary purchased (1911), and new pews installed (1915). Bishop Fitzmaurice asked for an estimate for stained glass windows in September, 1915. But, because the Mayer Company of Munich could not promise a completion date because of World War I, the Bishop did not sign the con­tract. Estimated price was $13,666.

On October 17,1916, the great pipe organ which had been built for the Columbian Exposition of Chicago in 1893 was purchased for the Cathedral. It was valued at $25,000 and according to the Erie Times was a gift of the Casey family. The Tellers and Sommerhof Company rebuilt and installed the organ for $5,000.

Meanwhile, back in 1903, Bishop Fitzmaurice purchased the Dr. Montgomery home on West Tenth Street adjacent to the cathedral for a new rectory at a cost of $23,000. Soon after the rear addition was constructed, the old rectory facing Sassafras Street was demolished. 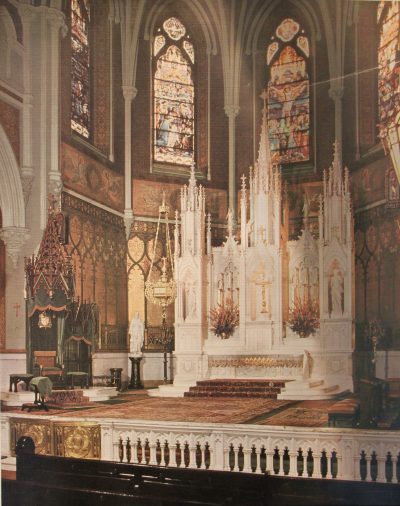